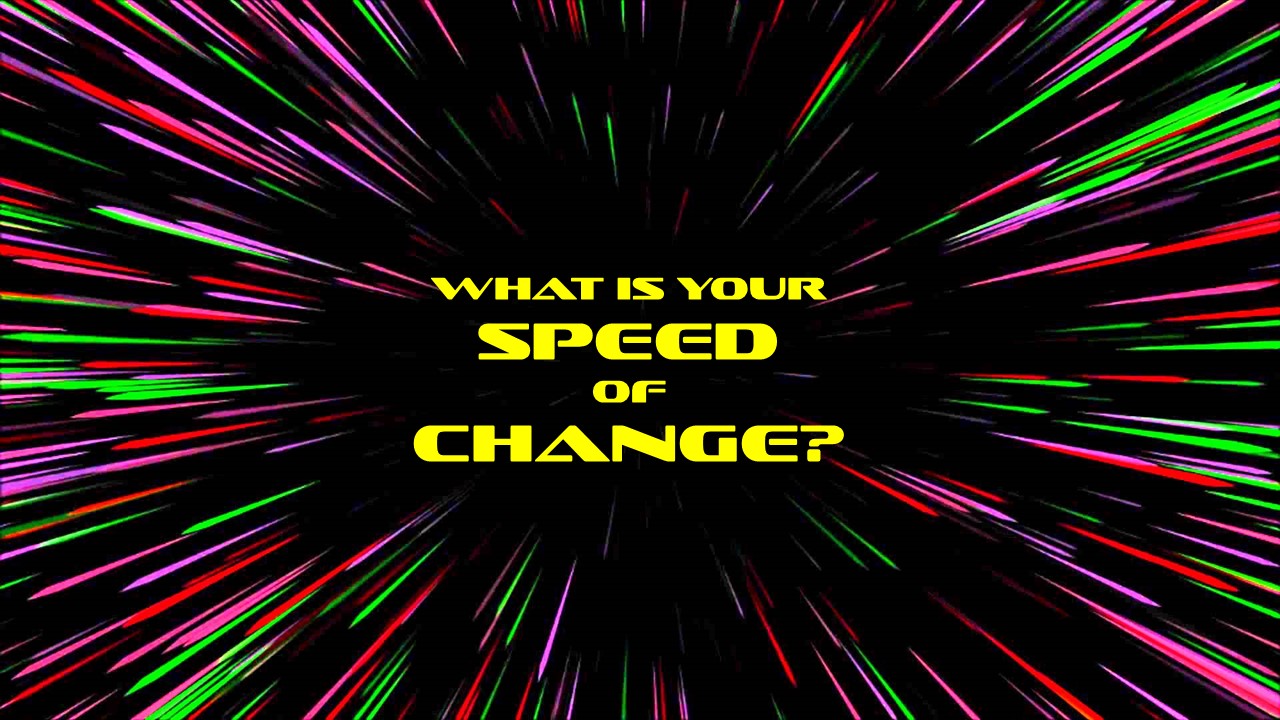 Home » What Is Your Speed Of Change?

Can you change? Of course you can. Everybody changes every day. But how versatile, agile, and quick can you adapt yourself and your organization to stay relevant in today’s society?

Organizations are always evolving. What’s different now is that we set new speed records of change on a daily basis. Technology gives us unprecedented possibilities. And this sea of opportunities is pushing the traditional bureaucratic, controlled, and hierarchical organization into an identity crisis.

In these bureaucratic organizations, too many departments and employees became blind, inactive, and unpassionate about the purpose of their organization and with that their own purpose. Desire for control, useless management layers, and fear have disrupted them to a paralyzed state, leaving them inactive. They are about to become unfit for natural selection in the competitive environment of today’s marketplace.

So what happens? They try to adapt. But too many organizations spin the wheel before their own eyes, running big change campaigns without proper intrinsic change. Some examples:

1. The purpose of too many companies shifts to money, money, and money.

A great idea becomes a great startup company because it has a purpose to change something, to improve a way of life. Of course it needed money for that, but money was a means. Not a goal. Somewhere down the line, while growing up, the means (to have money) became the goal, clouding the organization’s original purpose. And the moment the organization celebrated its public offering it effectively toasted its purpose becoming a marketing slogan on its website.

Employees that dig into their bureaucratic job description because they are afraid to lose their job are effectively building silos. Silos give a false sense of safety, because these employees can ultimately lose their job if the company becomes obsolete, if it cannot adapt to changing circumstances. It’s a no-win situation in which people can lose more than their job. They might lose something truly valuable: their passion.

3. The companies with complex 3D matrixes and structures can’t scale.

Some companies add a chief strategy officer and a chief innovation office on top of all the layers already in place and shout that they are innovative. That is just adding layers of complexity and in fact reducing the power to innovate. It’s a fake perspective on innovation that they spin towards their employees and customers. It’s the same way of thinking with a new marketing message.

4. Hierarchy, fear, and spreadsheet management are the enemies of an open mind.

So… what can you do?

It’s impossible to face today’s challenges with yesterday’s solutions. That’s insanity. Instead, think about your organization as an organism. The name already implies it. A company cannot be a concrete bureaucratic factory of the 20th century anymore. It should be able to connect and adopt with its environment. Be flexible. Be scalable. And modern technology allows this in amazing ways. Two ideas that can help:

Crowdsourcing is a fantastic way to become more agile and natural. Trust the (your) crowd and embrace the power of social collaboration to do so. How? Investigate processes that can be crowdsourced and hand them over to the crowd. Simple right? Some inspiration:

Behave more like a kid. Because doing is the best kind of thinking. When we grow up we tend to lose our appetite for games. During meetings, I often ask “Who plays games here?” The response is astonishingly low in business meetings. Either nobody plays, which is a problem. Or they don’t dare to say it, which is a problem too. My arguments to play more:

Do not settle for an average transition model. If you are in a business transition program that is supported with a boring 112-slide PowerPoint deck, a five-year roadmap, and more steering committee members than people who actually create content, then think again! It’s the speed and direction of your change that matters.

Talk to our consultants today.
BOOK MY FREE CONSULTATION